Company car taxes are set to rise in the UK but the Government also needs to consider how to adopt the new WLTP CO2 figures as emissions are key to calculating company car tax (CCT) liabilities. Autovista Group’s analysis reveals that simply using WLTP figures would have a dramatic effect on the tax liabilities of company car users unless the current CCT regime is thoroughly overhauled. This would further squeeze household budgets, which already face increasing pressure from the spectre of rising interest rates and inflation as the UK leaves the European Union.

In the UK, CO2 emissions figures are used to calculate the percentage of the car’s list price that is taxable, known as the Benefit-in-Kind (BiK). There is also a surcharge applied to all diesel models, which increased from 3% to 4% in the current financial year, i.e. since 6 April 2018. The company car driver is then liable to pay the tax on this amount at their personal income tax rate.

Moreover, these tax hikes are compounded by the change in emissions figures as cars have switched from the old NEDC results to the new NEDC-correlated (NEDC-c) figures. On average, this has further increased the BiK in the current financial year by a magnitude of around 10%. But it does not end there as the UK Government is also considering how to use WLTP emissions figures to calculate BiK rates in the future.

Given this, Autovista Group has calculated the Benefit in Kind (BiK) rates of popular diesel company cars in the B, C, D, and E segments based on their NEDC, NEDC-c and WLTP emissions figures for the financial years 2018-19, 2019-20 and 2020-21. 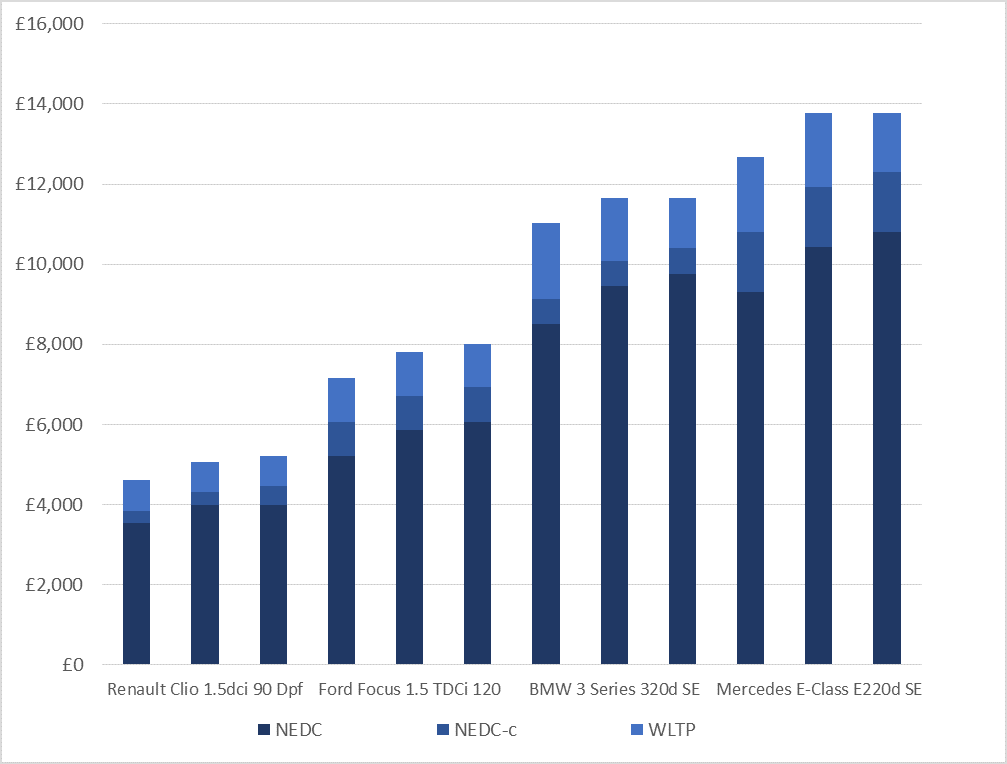 As far as the cars under review here are concerned, the adoption of WLTP emissions figures would add £768 to the BiK rate of a Renault Clio 1.5dci in FY2020-21 and £1490 to a Mercedes E220d for example. Paradoxically, the smaller the car the bigger the hike in percentage terms as the deviation between WLTP and NEDC-c emissions figures diminishes as emissions rise.

With BiK rates set to rise further, company car drivers may be increasingly tempted to opt for cash allowances. Anthony Machin, Head of Content at Autovista Group’s UK arm, Glass’s, commented: ‘Many companies have dabbled in releasing employees from company car schemes and giving them a car allowance and as cars become an increasing liability for both employers and employees, more are sure to reimagine how their car schemes function. As more people stretch their budgets, it may be good news for used car sales, especially nearly new cars where PCP finance deals are increasingly available.’

Toby Poston, Director of Communications and External Relations at the BVRLA (British Vehicle Rental and Leasing Association), also highlighted that company car buyers ‘leaving the duty in care environment has a knock-on effect on the car parc and higher taxes are driving the overall ageing of the fleet.’ He added that the tax hikes are ‘at exactly the wrong time’ as the Government is seeking to promote new low-emission cars in order to reduce pollution.

Using WLTP emissions figures to calculate tax liabilities would only compound this issue if the current BiK regime is not radically changed. Poston commented that ‘it would be completely unfair if the Treasury didn’t take this into account and took the view that the differences are an issue for manufacturers.’ He added that ‘not introducing WLTP for tax purposes helps but lead times have been extended and fleet managers are struggling to find out what the latest information is.’

Although the tax intake would rise as a result of adopting WLTP figures, Poston said ‘the Treasury didn’t see this as a tax grab’ but the implications for the fleet finance sector are still potentially catastrophic. A downward revision of CCT thresholds is therefore essential but a simple broad reduction in CCT liabilities will not suffice as achieving tax neutrality is far more complex. For example, Finland recently introduced a revised registration tax table for WLTP emissions, but this has not achieved the desired tax neutrality.