Who will buy Europe’s used-electric cars?

We are excitedly observing EVs making great strides across Europe as the combination of government incentives, improved infrastructure, extended ranges, more choice, and the fear of CO2-fines pushed market shares of EVs beyond 10% in 2020. Forecasts point to market shares of around 40% in Europe by 2030, 80% of them being battery-electric vehicles (BEVs). For BEVs alone that creates a €92 billion remarketing challenge, which we need to tackle.

The root cause is an increasing trend towards leasing over the past years, which overcompensates the contraction of the new-car market, creating more young-used vehicles than ever. This trend will intensify over the coming years, also driven by the vast majority of EVs being in a leasing or PCP-type arrangement. OEMs are very much in favour of this trend, as they see an opportunity to stay much closer to the driver.

There are substantial upsides for key stakeholders as the number of young used cars rises. Auto1, with the ambition to become Europe’s Caravana – all online, without a physical network and with a 14-days return policy – saw a very favourable stock market evaluation during its initial public offering on the Frankfurt stock exchange last Thursday. They are valued at €12 billion. Dealer groups will further professionalise their used-car operations. Used-car sales remains the second-most profitable business for dealers, behind after sales and before new-car sales. Lastly, with more powertrain types entering a portfolio of assets, we will see the positive impact that diversification has on the risk/reward profile.

However, there are downside risks as well with the rise of the EV. Government incentives create an inherent imbalance of domestic new and used-car markets. Good examples are the French market, where EVs (in particular BEVs) have been subsidised heavily for many years. Prices for used BEVs have deteriorated fast. Demand on the used-car market has not yet picked up speed.

Germany is another example of a potential remarketing risk building up around EVs, but this time in particular for plug-in hybrid electric vehicles (PHEVs): domestic demand on the new-car market may outpace demand on used-car markets. The reason is that company car drivers of PHEVs pay less taxes – the tax advantage can easily reach €2,000-3,000 every year for picking a PHEV over a diesel or petrol engine. Used-car buyers experience none of these benefits, demand for used PHEVs will be lower and prices will suffer, unless EV-import markets are ready to absorb a fair share.

No signs of saturation of EV-import markets yet

Spain is another typical used-car export market. The country exported 97,000 vehicles in 2017. In 2018, this number rose to 157,000 and in 2019 there were 165,000 used vehicles exported. This number was unaffected in 2020 – 164,000 used vehicles were exported from Spain, mostly into France, Italy, Germany and Portugal, due to a very high demand for vehicles during the pandemic and continued large supply that could not be fully absorbed in Spain.

There is a risk of oversupply to EV-import markets, should domestic used-car markets not pick up speed quickly towards BEV and PHEV adoption. Governments should look into providing incentives to encourage BEV and PHEV used-car ownership. These do not need to be straightforward purchase incentives. Lower energy cost for those charging a BEV or PHEV would also be a powerful signal.

There are currently no signs of a saturation on EV-import markets, even if demand for certain powertrain types may be overstimulated domestically on new-car markets – for example in Germany and France. The demand for BEVs in Norway is expected to grow by 13% annually over the next five years, according to Rødboka Norway. So it will be a question of exchange-rate development and purchase power rather than demand.

Used-car exports from Germany in 2020, by engine type 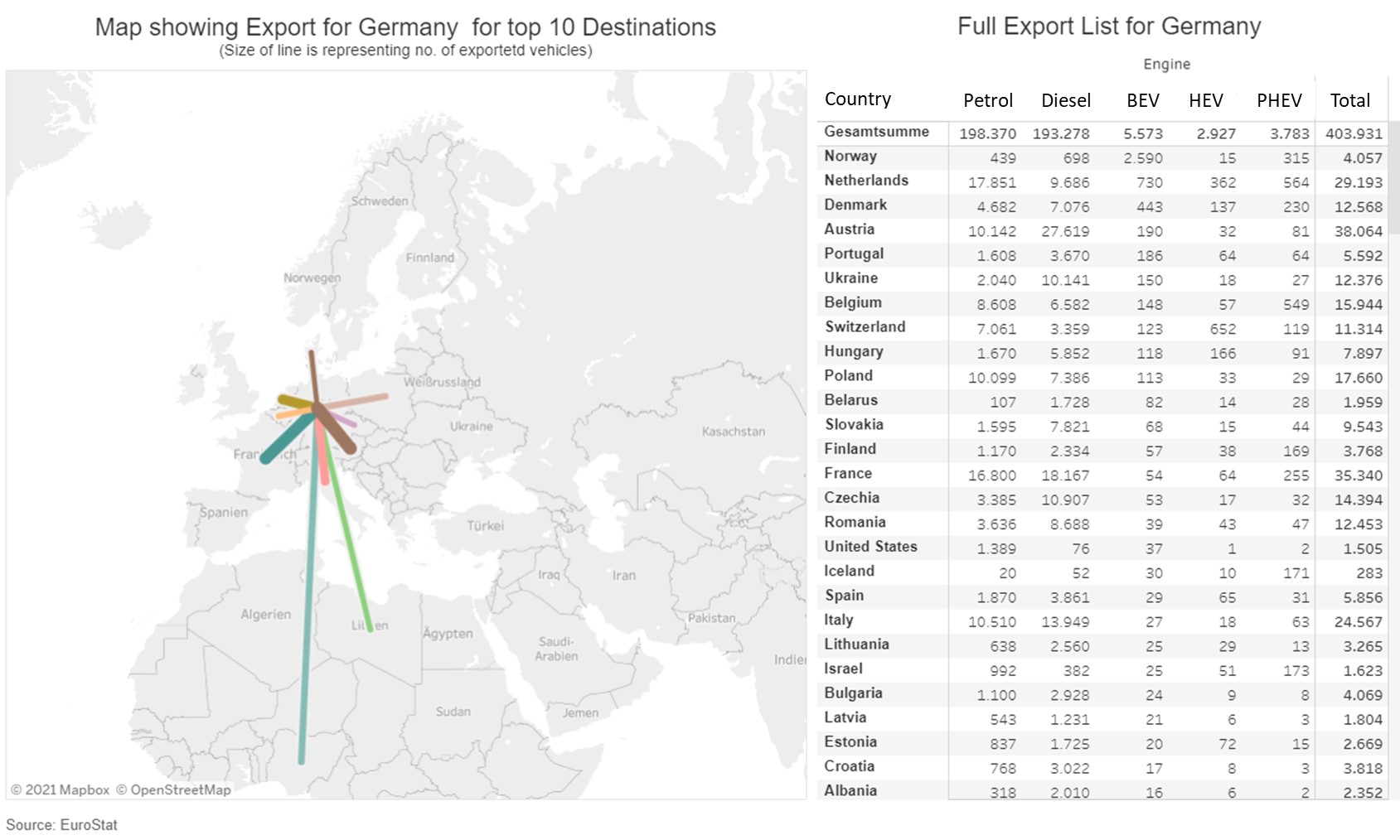 A free cross-border flow of used vehicles is how supply and demand meet most effectively. With more differentiated powertrain portfolios, risks around the demand for petrol, diesel, PHEV and BEV, industry stakeholders are well advised to professionalise their cross-border remarketing activities to benefit from it in the future, as the speed of adoption of used-car markets will differ widely.