Supply chain will be hit hardest in no-deal Brexit

Supply chain will be hit hardest in no-deal Brexit

The parts and supply chain is the most vulnerable part of the automotive industry as the UK heads towards a potential no-deal Brexit.

Should negotiations fail and Prime Minister Boris Johnson stick to his plan of Britain leaving the EU on 31 October no matter what, it is likely that tariffs will be added to imports and exports to and from the UK, while customs checks at ports will be lengthened.

Therefore, there will be delays and costs added to automotive parts. The latest Autovista Group poll found that 42% of industry respondents believe such manoeuvres will cause issues for the supply chain as a result. 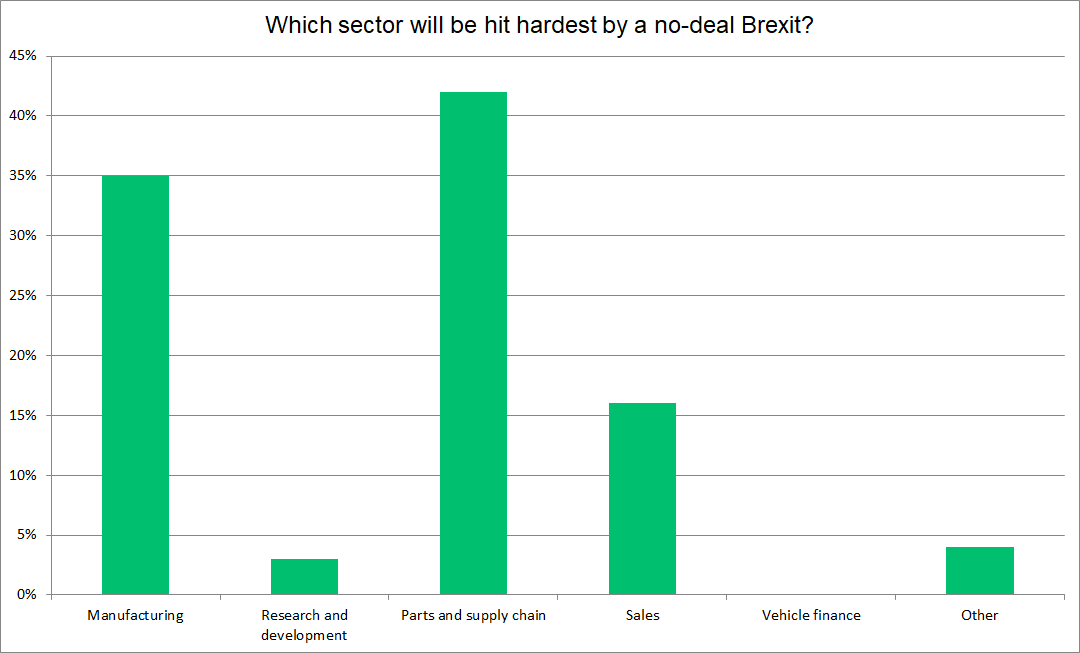 Carmakers in the UK, as well as the rest of Europe, operate on a ‘just-in-time’ system, with 1,100 trucks delivering up to £35 million (€37.7 million) worth of parts from overseas to factories every day, according to the Society of Motor Manufacturers and Traders (SMMT). Additionally, 4,800 cars and 6,500 engines are exported per day.

Tariffs and delays will hit this train of parts and supplies, which could cause bottlenecks in production and/or will force manufacturers to source UK-based parts that may cost more. Stockpiling products is not an option as it will require a different logistical mindset and more expense if warehouses are required for storage. It is the risk of production bottlenecks that caused some manufacturers to shut plants in April, ahead of the original Brexit deadline.

Second in the poll with just over a third (35%) of the vote, the manufacturing sector would be the hardest hit by a no-deal Brexit.

PSA Group has already warned that it will consider the future of its Ellesmere Port plant as it looks for production bases for its next-generation Astra, while Honda and Ford have both closed plants – although neither has cited Brexit as a reason for this.

There are also concerns over Nissan’s Sunderland plant, with the Japanese manufacturer pulling potential X-Trail production from the facility while also recently announcing it is cutting 12,500 jobs globally and reviewing its production facilities. With most of Sunderland’s output exported, and additional costs, there is speculation that manufacturing will be cut, or worse, the plant will be closed.

In third, far behind with 16% of the poll was vehicle sales being hardest hit. Currently, Britain is suffering from a drop in new vehicle registrations, as it did in 2017 and 2018 - the two full calendar years since the country’s referendum over its EU exit. With uncertainty over the economic situation that Brexit, in whichever form, would cause, both consumers and the public are not spending money. A vehicle is a big purchase, so keeping money back is a key consideration at present.

Should a no-deal Brexit occur, it is likely there will be a further drop in the value of the pound, which may destabilise companies and could cause job losses or restructuring, while the addition of tariffs on imports and exports will also likely push vehicle prices up. Conversely, if no deal is the only option, sales could rise in September and October as consumers take advantage of lower car prices.

Research and development gained just 3% of votes, with concerns over immigration leading to experts from Europe not being recruited for UK research, while the ‘other’ category gained 4%.

Comments from this included many stating that no sector will be hit, with current uncertainty just part of ‘project fear’ and that a no-deal Brexit would be best for the country. Others said all sectors would be affected, not just a single one.