As German cities start implementing diesel driving bans following advice from the country’s high court, Autovista Group wanted to know which engines should be subjected to restrictions on entering certain areas of these regions.

Germany’s court ruled that driving bans should cover any vehicle with a Euro 5 and lower engine. However, as Euro regulations consistently tighten the rules, Euro 5 and Euro 6 engines are cleaner than older versions, of which there are more on the roads around the world.

With the growth in the amount of CO2 being pumped into the air as drivers switch to petrol models, a solution needs to be found that can reduce nitrogen oxide (NOx) while preventing further carbon dioxide rises.

Readers of the Daily News Brief were asked, what type of passenger car diesel ban cities should implement for a balanced reduction of air pollution. Going against the court’s ruling, 41% of respondents to the Autovista poll said that city bans should only be levelled on vehicles with Euro 4 engines and below, commonly regarded as some of the dirtier diesel models. In the second, Euro 5 and below vehicles saw 29% of respondents agreeing with the court ruling. 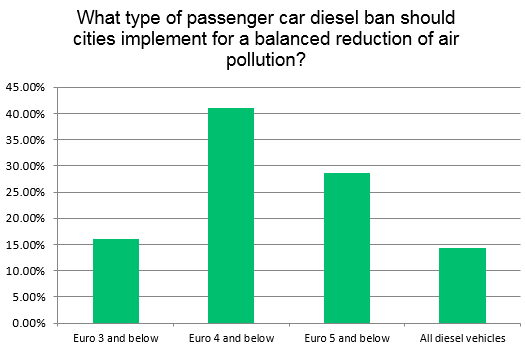 A total of 9% of those who answered the Autovista poll felt that the ban should only be brought on Euro 3 and lower vehicles, while 8% felt that to implement a balanced reduction, all diesel vehicles, including the latest models, should be subject to city bans.

In the comments, one respondent suggested that while banning diesel can reduce levels of particulates, it will not help other kinds of pollution. Therefore, cities should look at public transport and avoid using older buses, with Euro 0 – 3 engines, and trucks. Another comment highlighted the issue of agricultural pollution with diesel engines.

Another comment highlighted that partial city bans, such as the one brought into Hamburg on 31 May, would not work. If a whole city is not blocked, traffic will simply divert around bans, leading to more pollution.

There were also suggestions that diesel driving bans should be phased in, with one comment suggesting a multi-year period with at least one year’s notice and a diesel scrappage scheme to support it, while another suggested bans should be brought in on Euro 5 vehicles in around five years’ time. One other commenter suggested that older petrol vehicles should also be banned.

The German court has ruled that bans can be initiated immediately, with other German territories looking to bring in restrictions. Hamburg will monitor the air pollution on areas covered by bans closely before deciding whether to expand the measures.