In the second edition of a new monthly initiative, Autovista Group has created a dashboard showcasing the latest data on residual values, average selling days, the fastest-selling used cars and the residual-value outlook in France, Germany, Italy, Spain and the UK. Senior data journalist Neil King discusses the findings.

Autovista Group’s new interactive monthly market dashboard (MMD) reveals that the average residual value (RV) of cars aged 36 months and with 60,000km grew year on year in all the Big 5 European markets in November. However, there are clear signs that RVs have now peaked, with values lower than reported for October in all countries except France, which reported month-on-month pricing growth of just 0.1%.

RV retention, represented as RV%, grew year on year in all markets except Germany. The highest growth in RV% terms was in the UK, where the average RV% was 47%, equating to a healthy 15.1% change compared to November 2019. Nevertheless, even residual values in the UK were lower than in October in both value and retention terms. 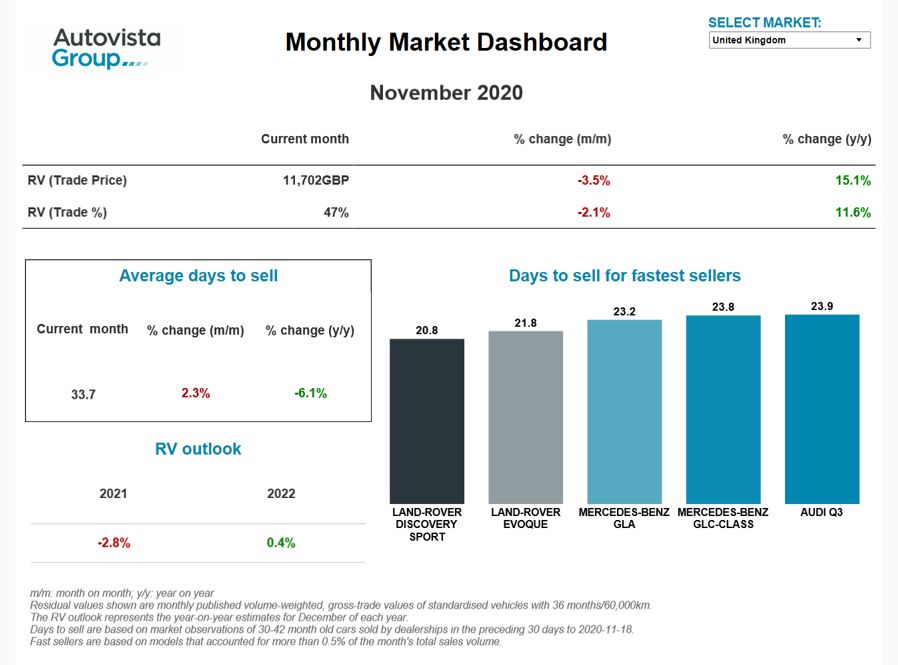 The UK has enjoyed the strongest rally in used-car prices since Europe emerged from lockdowns. This was driven by the release of pent-up demand, and a starker vehicle-supply challenge than any other market, which translated into higher RVs as used-car demand outstripped supply.

However, as reported in our latest coverage of the ‘three-speed’ development of RVs across Europe, RVs in the UK have been descending from their great height since late October as pent-up demand is broadly satisfied and new-car supply has improved. With England back in lockdown until early December, and the Brexit transition period ending on 31 December, a further descent is expected as the year-end approaches. ‘With the new lockdown, it is likely that RVs will continue to fall from their high 2020 position back to where we forecast,’ commented Anthony Machin, head of content and product at Glass’s.

In addition to the growth in RVs in most markets during November, three-year-old cars are also selling quicker than a year ago in all the major European markets, except Spain. Three-year-old cars are selling the quickest in the UK, moving on after an average of less than 34 days. However, the greatest reduction in the average number of days for 36-month-old cars to sell, compared to November 2019, was in France. These vehicles now have to wait on average only 35 days to find a new buyer in France, sitting idle for a significant 22% fewer days than in November 2019.

The three fastest-selling models in France in November 2020 were all Audi models. The A6 took just 11 days to find a new home and the A5 and A4 both sold after about 15 days on average. Following the Audi trinity, the fastest-selling model across the major European markets was the Volvo XC90 in Italy, which took only 17 days to be rehomed in November.

The new MMD also features the latest Autovista Group RV outlook for the major European markets. The new downward trend for RVs is unfortunately forecast to continue in 2021, with prices of used cars in the 36 month/60,000km scenario going into reverse in all the Big 5 European markets. In the November update, the RV outlook for Spain and Germany was subtly revised. Crucially, used-car prices are now also forecast to decline in Germany in 2021, albeit by only 0.7%. The weakest outlook is for Italy, where RVs are currently forecast to be 3.9% lower by the end of 2021 than at the beginning of the year.

Click here or on the screenshot above to view the monthly market dashboard for November 2020.