Investment drop is the biggest fear over no-deal Brexit

Investment drop is the biggest fear over no-deal Brexit

The fear of reduced investment will be the biggest impact of a no-deal Brexit, as companies in the UK decide whether any import and export tariffs or customs delays are worth gambling on.

The latest Autovista Group survey found the majority (42%) of those working in the automotive industry are concerned that carmakers and parts suppliers will reduce their spending in the country - especially as any increased costs would add to expenditure and therefore take away from any possible capital that could be injected back into the business. Since the EU referendum in June 2016, investment in the UK has collapsed and was down by 50% in 2018. 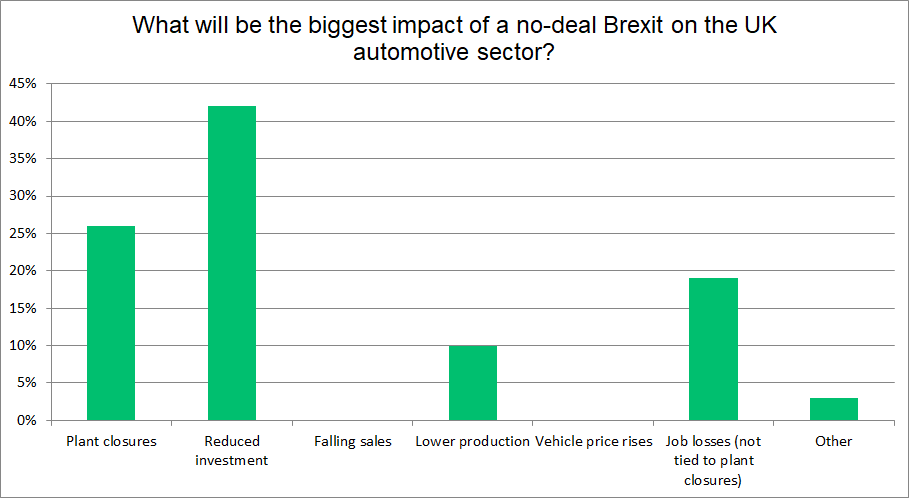 Brexit is the key concern for manufacturers. Just last week, PSA Group announced that it would build its next-generation Astra in two plants in Europe - one in Germany and the other in the UK ‘subject to Brexit negotiations’. With a warning like this, a no-deal Brexit may well mean the contract and investment would go to its plant in Poland instead.

Just over a quarter (26%) of voters felt that plant closures would be the biggest impact of a no-deal Brexit. Already the UK is seeing two major automotive manufacturing sites in the UK shut, although both Honda and Ford have insisted that Brexit played no part in their decisions. However, it is unlikely that the situation was not in the back of executives’ minds when considering the future of Swindon and Bridgend, respectively.

PSA’s stance could also spell trouble for Ellesmere Port and among suppliers, both Michelin and Schaeffler have shut UK factories - the latter directly blaming Brexit for its decision to close two plants in the country. With a no-deal Brexit increasing costs and potentially causing delays of ‘just-in-time’ deliveries, building on the continent, in a free-trade system, would be more logical to car companies.

An impact on jobs, and job losses not tied to plant closures gained 19% of responses. With possible increased costs in production within the UK, there will need to be cost savings somewhere, especially if models are moved to other plants in Europe. To ensure efficiencies are maintained and wages are trimmed, manufacturers may look to reduce their workforces in the country, helping them to balance the books more effectively.

Falling production levels gained a 10% share of the poll, a situation that the UK is already experiencing. A no-deal Brexit may impact sales (although no one voted for this option) and domestic production may drop as a result. Additionally, potential tariffs may see companies reduce their UK output to balance out the extra expense of shipping vehicles overseas.

Finally, 3% of voters chose the ‘other’ category, with everyone in this section saying there would be no impact of a no-deal Brexit on the UK automotive industry. With the damage currently being done due to uncertainty, it is possible that the country will sail through a potential hard Brexit, with all the current fears not being justified.

Until the 31 October deadline, there is no clear answer on what will happen when the UK leaves the European Union but, for now, companies across the sector are doing their best to prepare for every scenario.