In part 2 of the assessment of the impact of the coronavirus, Autovista Group has developed five scenarios relating to the used-car values across the Big 5 European markets.

In order to assist with analysing the impact of the coronavirus on the automotive industry, we have developed a number of scenarios. The scenarios are based on risks associated with the following five mandatory parameters as well as other country-specific factors that influence residual-value (RV) development:

Whereas most Western European countries would have thought only in January or February that any slight economic dip could be recovered swiftly, this view has fundamentally changed. Towards the end of March 2020, most countries are still allocating the highest probability to a low-medium risk scenario for used-car values. We call this scenario “moderately-quick V-shaped recovery”. Within this, we expect a sharp downturn of the economy during the second quarter, a V-shaped recovery towards the end of Q3 2020 and particularly good performance during Q4 2020, with some potential to compensate for the losses accumulating during Q2. For the full year 2020, this scenario works based on the assumption of year-on-year GDP growth of 0% to -2% in the Eurozone. But even in this scenario the Euro zone will not be back to its economic strength by the end of 2021, fully.

France is already more pessimistic in its assessment of the situation, but other European countries are also assigning substantial probability in the more pessimistic “slow, U-shaped recovery” scenario. In this scenario, we still expect a full recovery of economic activity during 2020 but the pandemic will cause longer social and economic disruption. The economy will only gradually pick up speed and economic activity will only be restored towards the end of the year. Under these circumstances, a recovery would more likely be U-shaped.

The UK is most pessimistic about the economic consequences of the combination of coronavirus and the Brexit aftermath. There is little trust in how the UK government has been dealing with the crisis and whatever pent-up demand there may be, the fragility of the economy is hugely concerning. Our Glass’s UK editorial team allocates 75% probability to a “deep recession, slow recovery” scenario. That is one where it will take up to six months to gain control over the pandemic, where monetary and fiscal stimuli have hardly any positive impact on the economy and private consumption. As a result, economic growth in the UK will be negative in 2020 and 0% in 2021.

Table 1: Risk scenarios for the impact of the coronavirus

Note: Each of the five mandatory, and one optional, parameters within each scenario contributes a country-specific risk score between one and five. The minimum risk score achievable is five and the maximum 30. The scenarios are built on risk scores. Countries have based their current probability on how likely it is that each scenario will emerge. The one that carries the highest probability is the base case for each market.

Despite stark pessimism in how the UK will digest the economic aftermath of the pandemic in combination with the Brexit negotiations, there is a positive note (figure 1). The expected impact on used-car values in the UK is not as severe as in other markets even in this darker scenario. By 2021, the UK will have fully recovered in terms of used-car prices to levels close to today.

The main reason is the limited elasticity in the market, together with the fact that supply of new cars has dramatically reduced and is unlikely to ramp up again soon. The expectation is a continued supply shortage during the economic downturn. Whilst the weaker British Pound is not helping, there is some pent-up demand containing the risks of further drops in used car values. Head of content and product at our UK subsidy Glass’s, Anthony Machin said: “Across the world, the automotive industry faces unfamiliar challenges. In the UK, after a strong start to 2020, like many around the world the car market is closed as the population adapts to new ways of working, socialising and shopping.”

France and Italy expect the biggest hit on used-car values to occur in 2021, after a more moderate decline in 2020 (France -1.5%; Italy -0.5%). Both expect the supply shortage of new cars to soften the blow. The full effect of the crisis should be visible during 2021. Italy is particularly exposed to the coronavirus pandemic dragging into a full-blown economic crisis that will impact private demand for used cars for a longer period. France is even gloomier about the economic challenges in 2021, which is why the expected drop in RVs is the highest among the Big 5 European countries. In neither market is a recovery of RVs expected during the period under review.

Germany sees the biggest drop in RVs occurring in 2020 (-2.2%). There will already be a small recovery in 2021 and then stabilising in 2022 at a level down 1.7% vs. March 2020 values. The expectation is that Germany will come out of the crisis more swiftly as private consumption will support the economy.

Spain will see a substantial drop in 2020 of 3% versus March 2020 values and that drop will remain stable also in 2021. Even in 2022, residual values will not have fully recovered. One of the main reasons is the very strong RV performance in Spain during the past few years. The downward correction will therefore be slightly more pronounced and drag on for a longer period despite the expected economic recovery.

Table 2: Forecast change in residual values between March 2020 and December 2020, 2021 and 2022 for highest-probability scenario by country in %

Figure 1: Indexed change in residual values between March 2020 and December 2020, 2021 and 2022 for highest-probability scenario by country in % 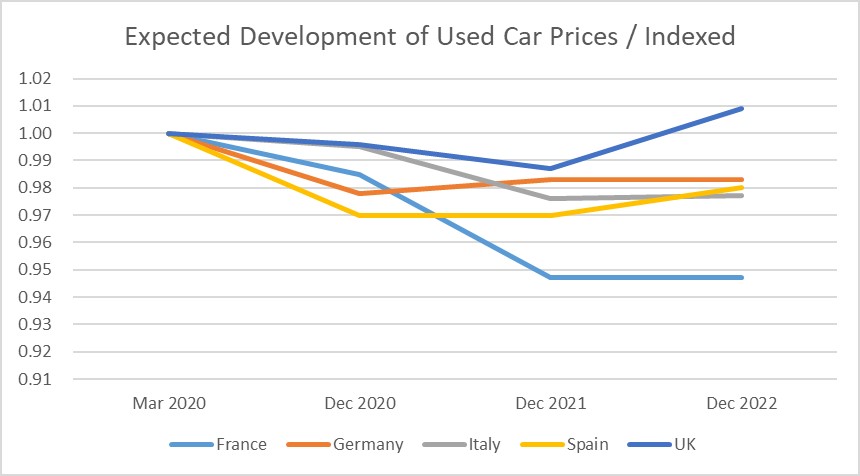 It is too early to draw a line under the analysis of what impact the coronavirus will have on societies, the economy and used-car markets. During the 2008/2009 crisis, we saw falls in RVs that were substantially higher than what our most probable scenarios currently forecast. At the time, declines of 12% on average across segments built up over 12-18 months into the crisis. We are currently far from expecting this level of impact on used-car markets, as indicated in our risk scenario probabilities and RV forecasts. Several things are different this time: euro zone governments have taken much stronger policy actions against the collapsing demand, the current economic shock is not paired with a lack of financing opportunity and after the peak of the crisis, we should see some pent-up demand as private consumer will regard the shock as temporary.

There are some mildly positive signs emerging in that the numbers of daily infections appear to be easing in the most affected European markets. However, the US, South America and many developing countries are at an earlier phase of the pandemic and will have to implement the same draconian measures to contain the development, with continued sizeable effects on economies around the world.

As the pandemic plays out, we will update this coverage, see how assumptions and scenarios evolve and how quickly and extensively the used-car market adapts.

Part 1 of this series, How will COVID-19 shape used-car markets? can be accessed here.