New-car registrations in the UK fell 89% year-on-year in May. This was expected as dealers could not reopen, but Autovista Group has downgraded its 2020 forecast to a decline of 30%. Senior data journalist Neil King discusses the latest developments and outlook.

The new base-case forecast of a 30% contraction in UK new-car registrations in 2020 is a downgrade from the 23% decline forecast in May and 20% forecast in April. In March, before the coronavirus (COVID-19) pandemic took hold, the expectation was that the market would only experience a 3% fall in 2020.

Aside from the fact dealers could not reopen in England until 1 June, they should only be able to reopen on 8 June in Northern Ireland and there is not yet a fixed date for them to reopen in Scotland and Wales, although this is expected to be later in June following review by the respective authorities. There are also growing concerns about supply shortages, at least in the short term. ‘There are cars in or about to enter the UK but getting them to dealers is difficult,’ commented Anthony Machin, head of content and product at Autovista Group’s Glass’s. ‘Logistics are not working at full potential yet. EVs will also be in short supply for new-car buyers in the UK.’

However, in an upside scenario, disruption to the UK automotive sector will be more short-lived as dealers quickly overcome supply shortages and return to full operational capacity. This would result in a lower loss of registrations in the coming weeks. A less severe impact on the wider economy would also bolster new-car registrations later in the year. In this scenario, about 400,000 registrations will still be lost but the forecast is for 1.91 million registrations in 2020, down 17.5% on 2019. 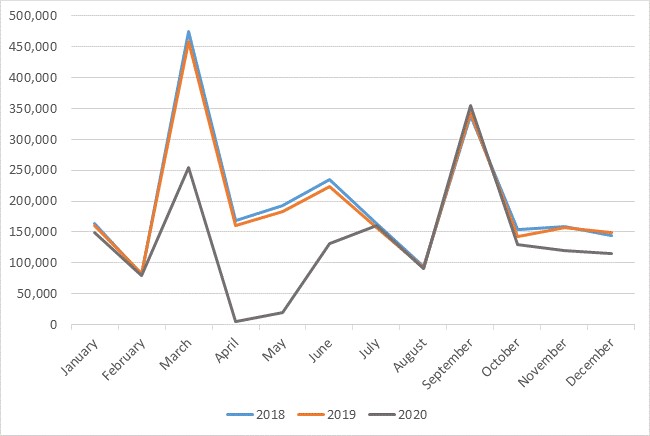 In the UK, dealers operated as usual until Prime Minister Boris Johnson announced restrictions in his address to the nation on 23 March. The update today (4 June) from the UK’s Society of Motor Manufacturers and Traders (SMMT) shows a 89% year-on-year decline in new-car registrations in May as dealers could not fully reopen.

As Autovista Group expected in April, the UK therefore recorded the worst performance of the major European markets. Dealers reopened during the month in France, Spain and Italy and hence the downturns were not as severe. In Germany, dealers could already reopen in April but new-car registrations still halved in the country in May.

On a positive note, ‘click and collect’ services, allowed from mid-month, saw some movement in the market’ the SMMT stated. ‘However, with 163,477 fewer registrations than in the same month last year, the performance still marked the lowest May since 1952,’ the association added.

‘After a second month of shutdown and the inevitable yet devastating impact on the market, this week’s re-opening of dealerships is a pivotal moment for the entire industry and the thousands of people whose jobs depend on it. Customers keen to trade up into the latest, cutting-edge new cars are now able to return to showrooms and early reports suggest there is good business given the circumstances, although it is far too early to tell how demand will pan out over the coming weeks and months,’ said SMMT chief executive Mike Hawes.

Although dealers are reopening across the UK in June, the performance of the other major markets in May does not suggest there will be a sudden surge in registrations after weeks of dealer inactivity. Furthermore, ‘logistics will affect June, even if there is a spike in demand,’ Machin commented.

‘I estimate that the UK will have lost up to 600,000 registrations between March and June 2020. A recovery period is expected to follow, with possible annual growth in new-car registrations in July as the backlog is cleared and pent-up demand is released,’ explained King. ‘Buyers may even defer registration of new cars until September, when the new age-related number plates become available. The underlying weakness in demand is expected to result in market contractions in the final quarter and my latest forecast estimates 1.61 million registrations in 2020, 30.4% down on 2019.’ 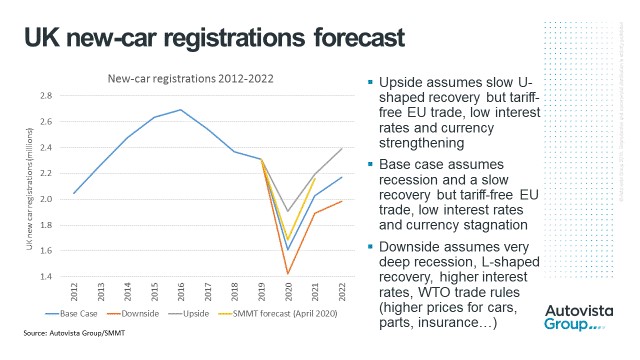 The outlook for 2021 is largely dictated by the extent of the losses to registrations incurred in 2020. The higher the loss this year, the higher the pent-up demand to be released next year. This explains why the steepest growth is forecast in the downside scenario and the weakest growth in the upside scenario.

Aside from the dramatic effects of the coronavirus crisis, uncertainty still remains surrounding the terms of the UK’s future trading relationship with the EU. Autovista Group’s base-case scenario assumes a deep recession and a slow recovery but ongoing free trade with the EU. In this scenario, the new-car market is forecast to grow 26% and 7% in 2021 and 2022 respectively, returning the market to close to 2.2 million registrations in 2022.

A downside scenario factors in the UK not reaching a trade agreement with the EU, resulting in a very deep recession and L-shaped recovery. The key consequence for the automotive sector is that WTO trade rules would be applied, resulting in higher prices for cars as well as for replacement parts and insurance. In this downside forecast, new-car registrations are forecast to increase by 33% in 2021 but only by 5% in 2022. At just under 2 million registrations, the market would still be 300,000 units lower in 2022 than in 2019.

In an upside ‘slow u-shaped recovery’ scenario, the comparatively limited impact of the COVID-19 pandemic in 2020 will be fundamentally recovered in 2021, with registrations growth of 15.0% anticipated. In conjunction with a trade deal that secures ongoing free trade between the UK and the EU, the new-car market is forecast to grow by a further 9% in 2022. At 2.4 million registrations, the UK new-car market would then be at its highest level since 2018.