New-car registrations in the UK plunged 97.3% year-on-year in April. With no clear indication as to when dealers may reopen, Autovista Group has cut its 2020 forecast to a decline of 23%. Senior data journalist Neil King discusses the latest developments and the downgraded market forecast.

The new base-case forecast of a 23% decline in UK new-car registrations in 2020 is a downgrade from the 20% contraction forecast in April. In March, the expectation was that the market would only suffer a 3% fall in 2020.

In an upside scenario, disruption to the UK automotive sector will be more short-lived as dealers are able to reopen earlier in May. This would result in a lower loss of registrations in the coming weeks, accompanied by a less severe impact on the economy, employment, consumer confidence and, in turn, new-car registrations later in the year. In this scenario, about 350,000 registrations will still be lost but the forecast is for 1.95 million registrations in 2020, down 15.5% on 2019. 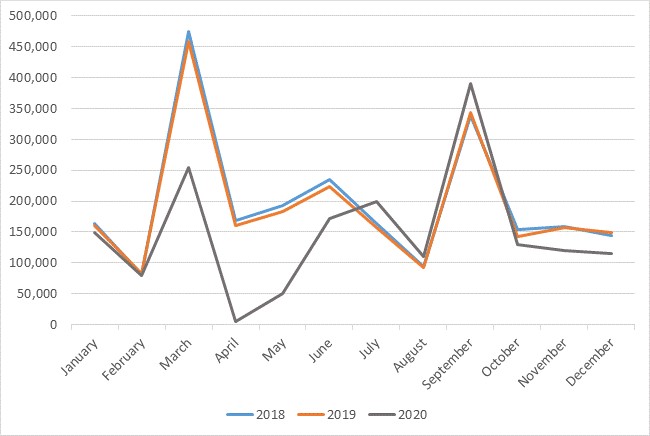 Source: Autovista Group (forecast from May 2020) and SMMT (historic data to April 2020)

In the UK, the course of the coronavirus (COVID-19) pandemic meant that the country’s dealers operated as usual until Prime Minister Boris Johnson announced restrictions in his address to the nation on 23 March. The latest update (5 May) from the UK’s Society of Motor Manufacturers and Traders (SMMT) shows a 97.3% year-on-year decline in new-car registrations in April. This mirrors the downturns in France, Spain and Italy. Only Italy recorded a greater contraction in the month, of 97.6%.

As it stands, there is no guarantee that dealers will be allowed to reopen during May, unlike in the other major European markets, and so the UK may record the worst performance in the current month. The next UK Government announcement concerning lockdown measures, and any potential easing, is scheduled for Sunday (10 May), following a review of progress in the country on Thursday (7 May).

‘Based on an assumption that dealers can reopen in late May, I estimate that the UK will have lost 500,000 registrations between March and June 2020. A recovery period is expected to follow, with growth in new-car registrations from July to September as the backlog is cleared and pent-up demand is released. However, the underlying weakness in demand is expected to result in market contractions in the final quarter and my latest forecast estimates 1.77 million registrations in 2020, 23% down on 2019,’ explained King. 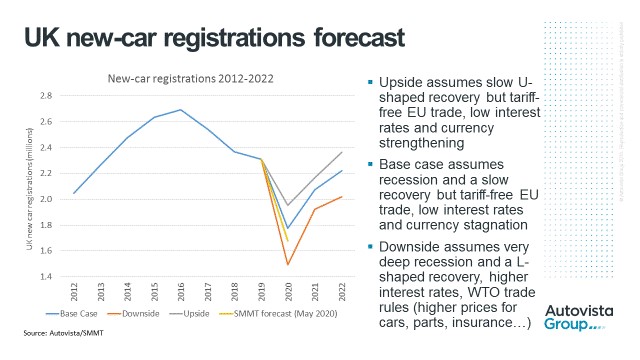 As discussed last month, the outlook for 2021 is largely dictated by the extent of the losses to registrations incurred in 2020 - the higher the loss this year, the higher the pent-up demand to be released next year. This explains why the steepest growth is forecast in the downside scenario and the weakest growth in the upside scenario.

The significant contraction of new-car registrations in April was to be expected but still ‘marked a record low for the new-car market as the COVID-19 pandemic forced the nation into lockdown for the entire month, with showrooms closed and car buyers housebound,’ said the SMMT.

Despite the dealer shutdowns, 4,321 new cars were registered in the month, with many delivered to key workers and frontline public services and companies. Understandably, fleet orders accounted for 71.5% of the market, with 3,090 registrations. Private buyers registered just 871 cars in April - a year-on-year fall of 98.7%. The impact was felt across all segments and fuel types but registrations of battery-electric vehicles only suffered a 9.7% drop ‘as some pre-ordered deliveries of the latest premium models were able to be fulfilled’ according to the SMMT.

‘Despite showrooms being closed for the month of April, companies managed to support key workers, critical companies and frontline services. Meanwhile, the industry has continued to keep service and repair workshops open to maintain vehicles that are so crucial in keeping key services, goods and people moving safely across the country,’ the SMMT highlighted.

‘With the UK’s showrooms closed for the whole of April, the market’s worst performance in living memory is hardly surprising. These figures, however, still make for exceptionally grim reading, not least for the hundreds of thousands of people whose livelihoods depend on the sector. A strong new-car market supports a healthy economy and as Britain starts to plan for recovery, we need car retail to be in the vanguard. Safely restarting this most critical sector and revitalising what will, inevitably, be subdued demand will be key to unlocking manufacturing and accelerating the UK’s economic regeneration,’ said SMMT chief executive Mike Hawes.

Aside from the dramatic effects of the coronavirus crisis, uncertainty still remains surrounding the terms of the UK’s future trading relationship with the EU. Autovista Group’s base-case scenario assumes a deep recession and a slow recovery but ongoing free trade with the EU. In this scenario, the new-car market is forecast to grow 17% and 7% in 2021 and 2022 respectively, returning the market to above 2.2 million registrations in 2022.

A downside scenario factors in the UK not reaching a trade agreement with the EU, resulting in a very deep recession and L-shaped recovery. The key consequence for the automotive sector is that WTO trade rules would be applied, resulting in higher prices for cars as well as for replacement parts and insurance. In this downside forecast, new-car registrations are forecast to increase by 29% in 2021 but only by 5% in 2022. At just over 2 million registrations, the market would still be 300,000 units lower in 2022 than in 2019.

In an upside ‘slow u-shaped recovery’ scenario, the comparatively limited impact of the COVID-19 pandemic in 2020 will be fundamentally recovered in 2021, with registrations growth of 11.0% anticipated. In conjunction with a trade deal that secures ongoing free trade between the UK and the EU, the new-car market is forecast to grow by a further 9% in 2022. At 2.4 million registrations, the UK new-car market would then be at its highest level since 2018.