Zef Eisenberg founded sports nutrition brand Maximuscle in 1995 and grew the business to be a Sunday Times “Top 100” company, collecting an E&Y UK Entrepreneur of the Year award along the way, before selling to Glaxosmithkline in 2011. He has since kept himself busy – among a variety of more “normal” business interests – by developing motorcycles to break speed records.

Probably the least remarkable record he holds is the fastest quad bike at Val des Terres, the British national hillclimb course on Guernsey, at 33.7 seconds. This was on his self-built 600cc two-stroke 125bhp quad, using the engine from a racing snowmobile coupled to a CVT gearbox which gives maximum torque all through the acceleration curve. That record was set in September 2016 but Zef hasn’t been back on the quad more recently as only 2 weeks afterwards he set a record he hadn’t been aiming for: he survived the highest speed non-fatal motorcycle crash ever – 230mph. Yet just a year later he was back on the rebuilt bike at the same venue – Elvington Airfield in Yorkshire - and this year he managed to set a new world record for a turbine-powered bike – 234.1 mph.

Zef, 45, now walks with a slightly rolling gait, the result of having a titanium hip, pelvis, ankle, femur and collarbone. He no longer has the flexibility needed to ride the quad in anger. He broke 11 bones in the accident, spent three months in hospital, another three in a wheelchair and was told he would never walk again. He readily admits to having had some dark moments, but he set himself a goal of getting back up to 200 mph and that was the light at the end of his tunnel.

But what about the machinery behind the records? Zef is a self-taught engineer, was a “techy nerd” at school, and was offered a place at Brunel University to study robotics. He has a team of three in the engineering department near his home in Guernsey, and designs and builds the machines there. He told me about three quite different two wheelers he has developed, using his brand name MADMAX ®. 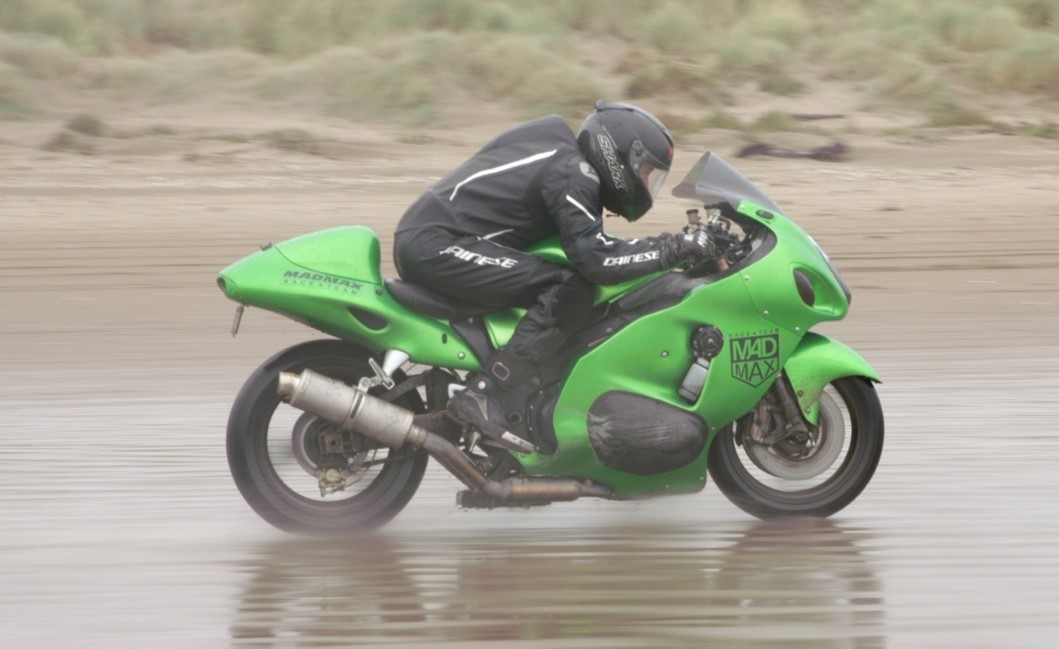 First, the turbine bike, which uses a Rolls-Royce C20B turbine from an Augusta Westland helicopter. To access full support for the engine, Zef completed several Rolls-Royce certified training courses with them and developed a unique relationship whereby he can obtain OEM parts from them. He is trusted to maintain what is an extremely powerful engine such that it is safe to run at speed events close to crowds of spectators. The turbine runs on kerosene and to achieve the 234 mph record in a mile from a standing start, it was developing 565 bhp at the rear wheel with 1150 lb/ft of rear wheel torque. A maximum speed run is over in 30 seconds, and on a whole speed weekend it will only be running for 15-20 minutes, in which time it will get through 40-60 litres of fuel. As the torque is so great, only a single speed gearbox is needed.

Zef’s second bike was developed for his attempt at the land speed record for a motorbike on sand, an activity that has absorbed him for the last 4 years. This takes place at Pendine in South Wales, where the official record of 174 mph was previously set by Sir Malcolm Campbell in Bluebird. In May this year, Zef set the fastest ever motorbike record of 201.5mph. In contrast with the turbine bike, a very different power delivery is called for on sand. Smooth, linear power delivery is needed to control wheelspin and so a turbo is unsuitable. Instead, he added a Rotrex supercharger to a strengthened 1440cc Hayabusa engine, in a modified Hayabusa frame, with a six-speed gearbox. 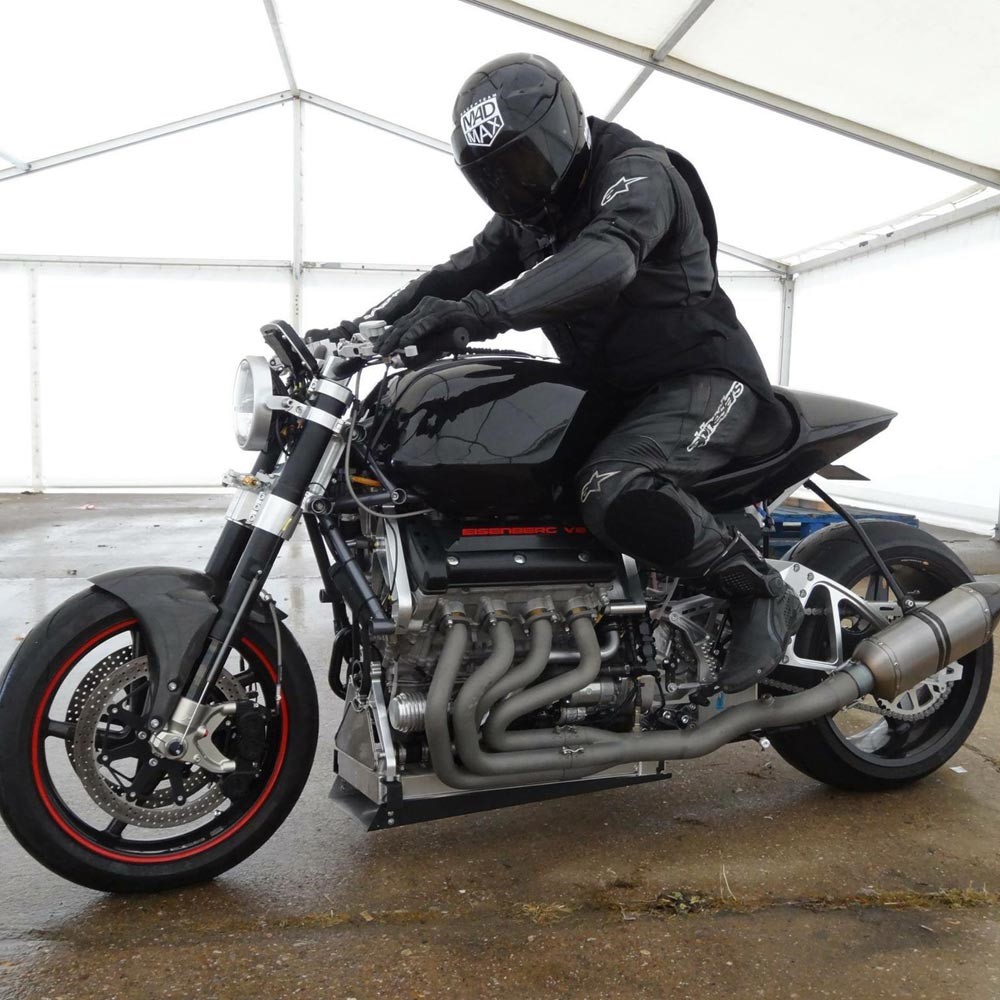 Zef’s third bike is different again: a road-legal bike which is the lightest, smallest and most powerful V8-engined motorcycle in the world. Called the EISENBERG V8, he is looking at a limited production run, although some further development will be needed for the cooling and electric system to ensure reliability in city traffic. A fabulous-looking machine, Zef and team designed it from scratch. The engine, a mere 81kg, is a normally-aspirated 3 litre with a flat-plane crank allowing it to rev to almost 12,000 rpm and produce 480bhp. 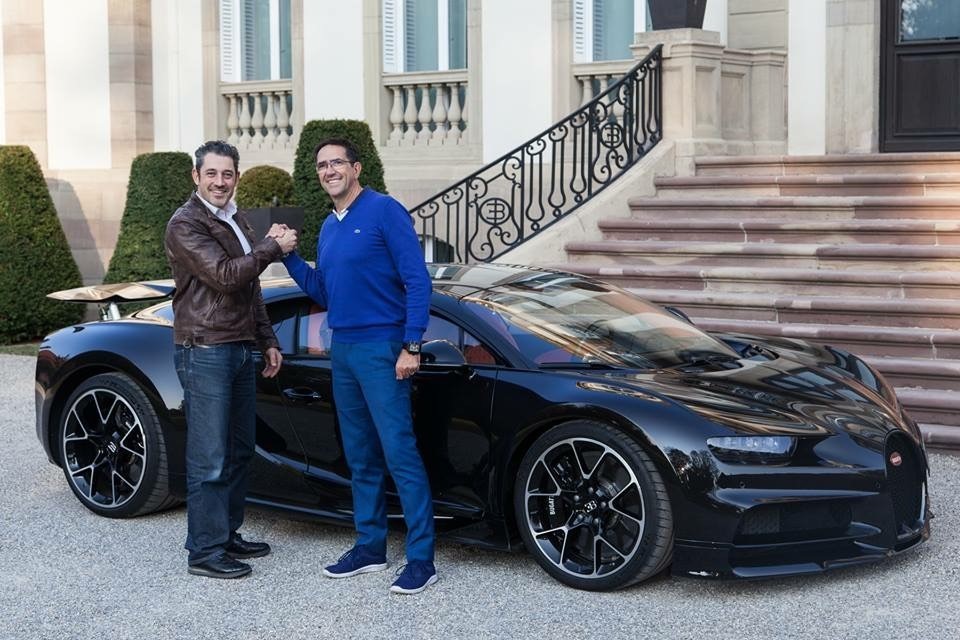 Not unsurprisingly, Zef also enjoys his motor cars, and tells amusing stories of driving to Israel in an Alpina BMW Z8 roadster, and a one-off Daimler V8 250 Convertible originally built for King Fayed, complete with engravings on the dash of some of the King’s lady friends. He currently has an Alfa 8C Coupe and a new 911 Turbo S but clearly the bikes are where his greatest passion lies.

It was inspiring to meet a guy who has the time and energy to follow his passion and imagination, with such brilliant results. As for him, what will he do next? After his recent meeting and ride with the Bugatti test driver and record-breaker Pierre-Henri Raphanel, my money would be on Zef breaking some records on four wheels…