Results: Many risks to manufacturers in the next ten years

Results: Many risks to manufacturers in the next ten years

The global automotive market is changing, and vehicle manufacturers are having to stay ahead of the curve, or risk financial implications through lost sales and penalties.

However, with so many areas to focus on, Autovista Group wanted to know what would be the biggest threat to manufacturers. Asking readers of the Daily News Brief for their views, three areas came out on top, all with differing potential impacts. 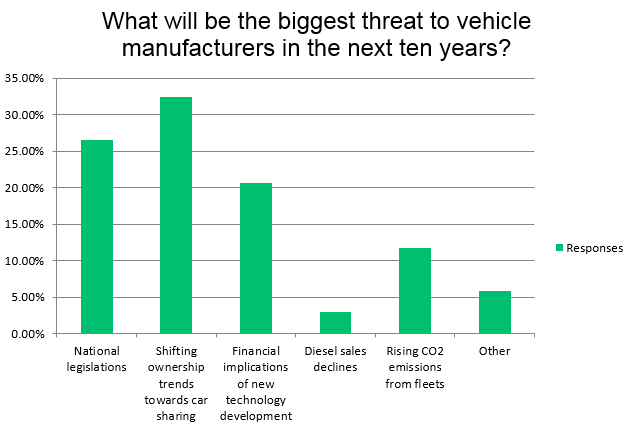 The biggest threat, with 35% of votes, was the ever-changing ownership landscape. More and more people are abandoning buying their own vehicle, instead concentrating on car-sharing schemes which allow them to get from A to B when they need to, and therefore not need to worry about tax and insurance. With autonomous cars looking to ply their trade in this market, consumers will also not have to worry about licences and tests.

There are growing signs this momentum is beginning to change mobility habits in Italy, with a study revealing that one in five users of car sharing has either already abandoned their own vehicle or have decided that they will forgo any future car purchase.

Second in the poll was national legislation, with 26% of respondents plumping for this option. This includes things such as France and the UK banning the sale of petrol and diesel vehicles from 2040, while Norway aims to rid its sales forecourts of them by 2025. Furthermore, city bans in Germany will push people away from diesel and manufacturers need to be prepared for this. In the UK, demonisation of diesel through tax hikes has led to many ‘sitting on their hands’ and keeping older vehicles, according to SMMT Chief Executive Mike Hawes.

Third on the list was the financial implications of new technology development. In order to meet strict CO2 targets by 2021, and even stricter measures until 2030, carmakers need to invest in electric vehicles and hybrid technology. Additionally, hydrogen is a potential fuel of the future which needs developing, while autonomous vehicle technology means manufacturers have to invest or risk being left behind. Some are further along than others on all these roads, so the cost of rapid development could be more than spreading it out over time.

12% of respondents felt that the rising CO2 emissions from their fleets were the biggest threat to manufacturers, with the collapse of the diesel market in Europe meaning financial penalties if 2021 targets are not met, while 3% felt the decline in diesel itself would do the most harm. 6% of respondents felt that other scenarios would cause damage, with these including autonomous vehicles themselves, potential recessions and the supply of raw materials for electric vehicle development.