Geneva remains the most important event for the industry

Geneva remains the most important event for the industry

The Geneva International Motor Show (GIMS) is the most important show for the automotive industry at present, despite fears over further manufacturers dropping out of future events.

The latest Autovista Group survey saw over half (52%) of respondents confirm that the annual Swiss event is crucial for the market. The event dominated the survey findings over other, perhaps more internationally recognised shows, highlighting how far Geneva has come and how recent event attendance has boosted its standing. 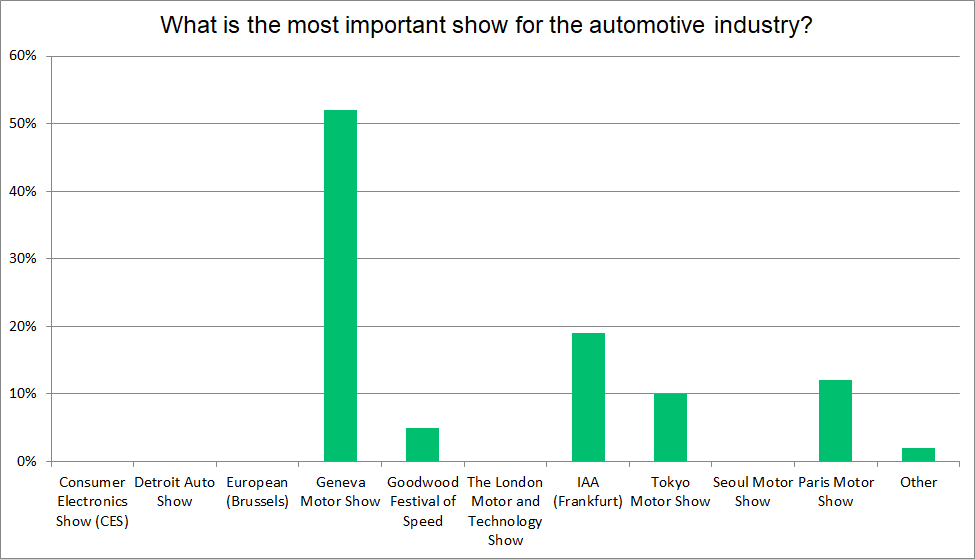 This year’s GIMS saw a number of carmakers continue their presence or return, as the industry put on a show to highlight the development of electric technology. Concept cars on display were all relevant to designs of future models, while other manufacturers launched electric vehicle (EV) programs or unveiled production-ready versions of previous prototypes. Additionally, the event saw manufacturers from all over the world descend on the city to showcase their latest vehicles to both the industry and consumers.

There have been fears over how relevant the motor show model is, with manufacturers pulling out of big events and consumers preferring to interact with vehicles rather than seeing them on static displays. This was mentioned in the comments, with some who voted for Geneva suggesting that the show will only be the most important in the short-term and that it needs to include interactivity in the future.

In second place, with just 19% of the votes, was the IAA Frankfurt. Hailed for years as Europe’s premier motoring event, this year will see a number of carmakers skip the event - including Toyota, Fiat Chrysler Automobiles (FCA), Nissan, Volvo, Mazda, Mitsubishi, Suzuki, Subaru, Rolls-Royce and Aston Martin. PSA Group will only be present with its Opel brand and Ford is making a return, but only as ‘it has something to show’ - expected to be its new Puma small SUV.

This suggests that manufacturers no longer find the IAA essential. The event has tried to add new mobility sections over the last few years, increasing the number of technology companies showing their latest developments in a bid to attract motoring officials and fill halls.

The Paris Motor Show gained 12% of the votes. This is another event that has seen its fair share of manufacturers pulling out, and one that is also looking to reinvent itself. The Tokyo show gained 10%, an event that sees more technology, especially electric and hydrogen, on show. Tokyo is also the biggest event for the Asian market but again has suffered from non-attendees.

Just 5% of people chose to believe that the Goodwood Festival of Speed was the most important show for the automotive industry. This is perhaps a surprising figure seeing as it offers everything that both carmakers and consumers want from an event and is the one many manufacturers are using to launch and tease new models. The event caters to enthusiasts who are also drawn by the motorsport spectacle, while the Moving Motor Show event on the Thursday of the festival gives consumers a chance to test drive vehicles before deciding whether to buy or not.

Finally, 2% of respondents chose the ‘other’ category, with answers ranging from Essen to Woburn Abbey. There were no votes for other events on the list of options.