Manufacturers are racing to achieve leadership in the electric vehicle (EV) market. However, it is not a sector that can truly be set as emerging. EVs have been around for some time, and thanks to the efforts of carmakers such as Nissan and Renault, are moving from niche to mainstream vehicle options.

However, the market for EVs has some way to go in order to achieve the intended target of becoming a viable option for drivers looking to trade in their petrol or diesel vehicle for an alternative. With the technology still in its infancy, infrastructure in countries has been slow to develop, while limited range and high costs, due to the expense of development and the materials within the batteries, are barriers at present.

Autovista Group asked subscribers of the Daily News Brief what changes they believed would be needed to make electric vehicles more appealing to a mass market. Of all respondents, 74% said increased range, faster charging times and a drop in purchase price were all needed if the technology was to take off in the European market.

We asked subscribers if there was one individual thing that was more important than the rest. Of those who responded to these points, increased range came top at 12%, followed by a drop in purchase price at 9% and faster charging times at 5%. From this, we can surmise that drivers like the ability to make long journeys in one stint, and that range anxiety is still a large factor in the decision to purchase an electric vehicle.

The fact that of these three points, faster charging times were a less important concern, with the ability to charge at home, or stop for a 30-minute charge on a journey seemingly achievable. It is interesting that purchase price was less of a concern than range anxiety, suggesting some drivers are happier to pay a premium for the technology. However, the majority of respondents felt all three areas need to be addressed to make EVs mass market.

Interestingly none of our respondents suggested that no changes would be needed and they would be happy to purchase an electric vehicle today. This highlights that the technology still has some way to go to convince the public that it is a viable alternative. With manufacturers such as Volkswagen pumping huge amounts into investing in EV technology, it is clear that some of this money will be needed to inform the buying public about the benefits while developing away from the current barriers in place. 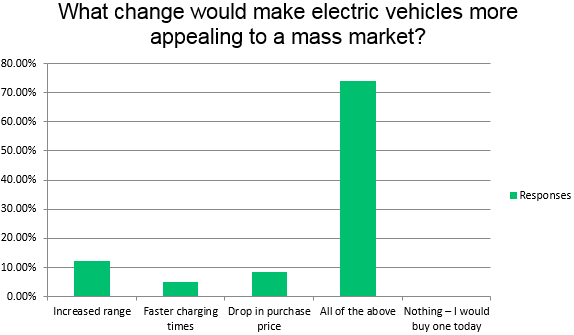