The automotive landscape is changing, and manufacturers should be looking to collaborate on electric vehicles, to reap the multiple benefits on offer.

Over half (55%) of respondents to the latest Autovista Group poll, asking in which area manufacturers should look to collaborate, thought that electric vehicles (EVs) would benefit the most from partnerships. Carmakers can share both technology and platforms, while halving their costs in an emerging market that is proving crucial for future mobility. 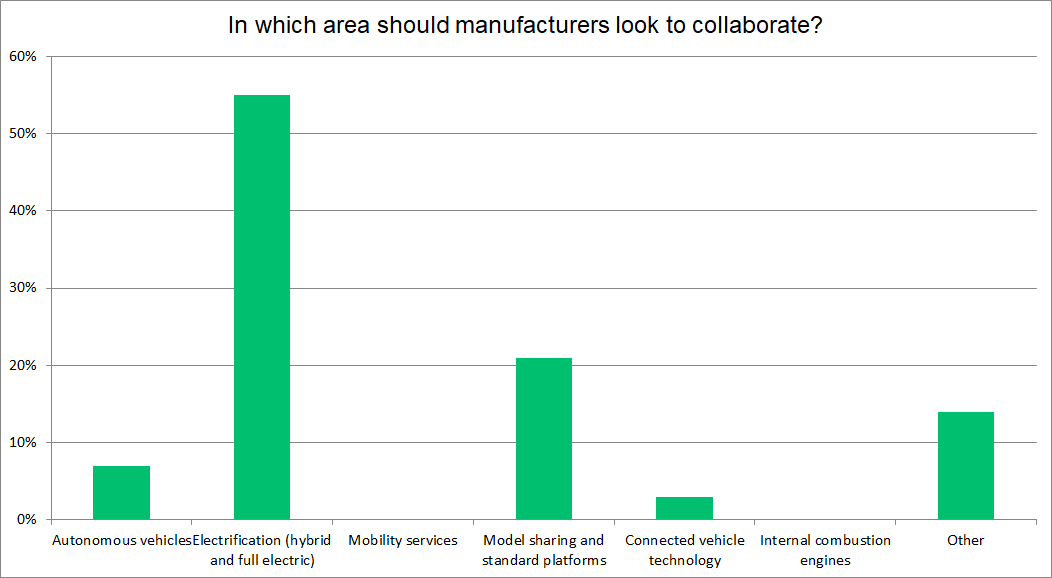 Already we have Ford and Volkswagen working together on EVs, with Toyota working with Suzuki, Mazda and Subaru. BMW is working with Jaguar Land Rover and Daimler sold a 50% stake in its Smart brand to Geely earlier this year, with the companies planning to make the marque EV-only. All these partnerships will share research and development duties and potentially platforms – Ford already announced a model based on VW’s MEB architecture – which will ultimately save costs.

Electric vehicles are crucial for carmakers looking to meet strict, and stricter, European CO2 targets. With the collapse of diesel, petrol vehicles have become the dominant force on the continent, but CO2 levels have risen as a result. Manufacturers have limits on the amount of CO2 output across their fleets and many are facing large fines. Therefore, there is a rush to develop EVs, especially battery electric vehicles (BEVs), which have zero emissions.

Model sharing and standard platform collaboration gained 21% of the vote. This is another collaborative effort being adopted by Toyota and Suzuki, with the smaller carmaker building cars for Toyota to sell in India.

This would be a benefit to smaller manufacturers, or those looking to enter new markets. It could also benefit the industry as a whole and is indeed already doing so through several shared platforms, especially on smaller vehicles.

Just 7% of respondents felt that autonomous vehicles were the area in which carmakers should look to collaborate. This is despite the market being the most intense, with new technologies and methods required alongside platforms. Additionally, this is also the highest-profile area for collaboration, with Daimler and BMW (and possibly Audi) working together in the area, while the Ford and VW collaboration also includes driverless technology. Fiat Chrysler Automobiles (FCA) has also joined a group including BMW and Intel developing autonomous systems.

Carmakers are being pushed into this route as external companies, such as Waymo and Uber, are forging ahead with disruptive technology that has the potential to change the industry. However, with the need to dedicate resources to EVs, collaboration on autonomous systems is almost essential. It is less important than electrification, which is essential for saving costs.

Connected vehicle technology gained 3%, a market where information would benefit manufacturers directly, and technology is already more established. The final 14% of the vote went to the ‘other’ category. While several respondents felt that hydrogen development was critical, some felt that the supply chain itself would benefit from closer ties. Others highlighted that as the market is changing, manufacturers should be collaborating on all of the options available.